Sing me a song of a lad that is gone,
Say, could that lad be I?
Merry of soul he sailed on a day
Over the sea to Skye.

This is the first verse of a poem by Robert Louis Stevenson, sung to the tune of popular Scottish folk number ‘Skye Boat Song’, about the escape of Bonnie Prince Charlie to the Isle of Skye following his defeat at Culloden. Skye was an island familiar to Stevenson from his own nautical travels around Scotland, although he wasn’t much impressed, once writing to his friend Fanny Sitwell “Pictures of Skye enclosed. They look well enough on paper, but in reality they are hatefully bleak and cold: they make my heart sick”* But the island did have at least one redeeming feature for the author: Talisker whisky, which he declared as his favourite among “The king o’ drinks.”

The Talisker distillery has been in operation since 1835 and is the oldest and most famous of the island’s whisky makers. Peering across the craggy coastline, the company makes much of its proximity to the sea, producing whiskies with names such as ‘Storm’ and ‘Neist Point’, and using the ocean landscape prominently in marketing and packaging.

Sidle your nose up to the rim of your whisky tumbler and you’ll instantly notice that this is a peated whisky. But it’s not one to fear for peat virgins. The first sip is pleasantly sweet with a good grainy character giving it some richness. Before a lovely dry, spicy finish kicks in, the peat has wafted into the scene, steadily building an intensity with every sip so that by the time you’ve finished your first dram you’re fully immersed in the smoke-experience without any bother at all.

For drinkers who think this might still be too much smoke to start out on, Talisker Skye is a similar whisky with the peat turned down, while the aforementioned Talisker Storm pushes in the opposite direction, with an increased intensity of peat for your palette.

For anyone following in the footsteps of Bonnie Prince Charlie and Robert Louis Stevenson and finding themselves on Skye, then a tour of the distillery will provide you with a slice of the island’s history (and, of course, a taste of the whisky).

There are currently three tours available: the Talisker Classic Distillery Tour is a mere £10 and lasts for 45 minutes; Talisker Flight at £25 is 1 hour 30 minutes and finishes with “an informal tasting of several expressions of Talisker Single Malt”; and the Talisker Tasting Tour is a 2 hour in-depth tour with a tutored tasting of 5 expressions of Talisker, costing £40. Check the website for opening times.

Talisker gets its name from Talisker House, historical home of the Clan Macleod, although the distillery is situated some five miles away at Carbost, Loch Harport. The area is notable for the presence of two rare species of Zygaenidae moths, the Talisker burnet moth and what sounds like the hardest moth to spot, the transparent burnet moth.

Grab yourself a bottle of Talisker 10 at The Whisky Exchange 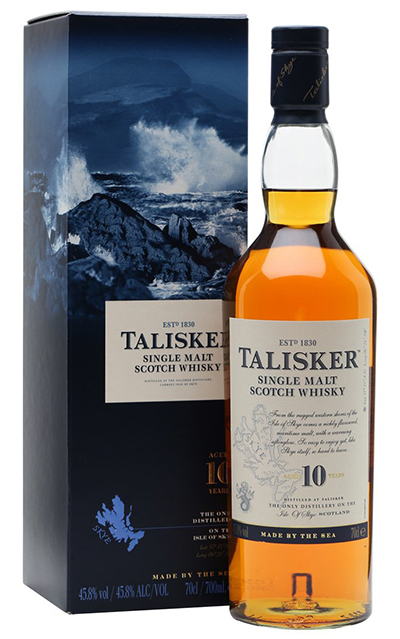