Later this year the Stihl TIMBERSPORTS® World Championships will be held in Liverpool, and to get people in the mood for the event Stihl invited a bunch of journalists to their training camp at Brooksby Melton College, Leicestershire. These were mostly fit, young journalists who worked on health and fitness magazines or extreme sports websites, but to show that you’re never too old to give it a go they also included us.

We were getting our excuses in early. Rich complained of shoulder RSI and residual pain from a hernia op, while I grumbled about a dodgy back while exaggerating a hobble caused by bruised knee ligaments. We threw poor preparation into the excuse mix – vital research into the pubs of nearby Melton Mowbray the night before – and reminded the trainers that we would be 50 in a few years. The age card was immediately trumped by one of the training team, Andrew ‘Taff’ Evans, who still competes at age 52. Our hobbles immediately intensified.

Joining Taff to show us the ropes were Spike Milton, Global Sports Director at Stihl TIMBERSPORTS® and 10-time British Champion, and ex-pro Rob Evans, while young buck Glen Penlington, current British number 3, was on hand to demonstrate how the disciplines should be done at a competitive pace. Stihl TIMBERSPORTS® competitions feature six events that involve saws,  chainsaws and axes, and each of the athletes need to be experts in all six. For our session we were trying out just two – cutting through a log with a single buck saw and the ‘underhand chop’ with an axe that Spike informed us was “so sharp you can shave with it.” With fear jangling our dodgy joints we first joined Taff for some sawing action. 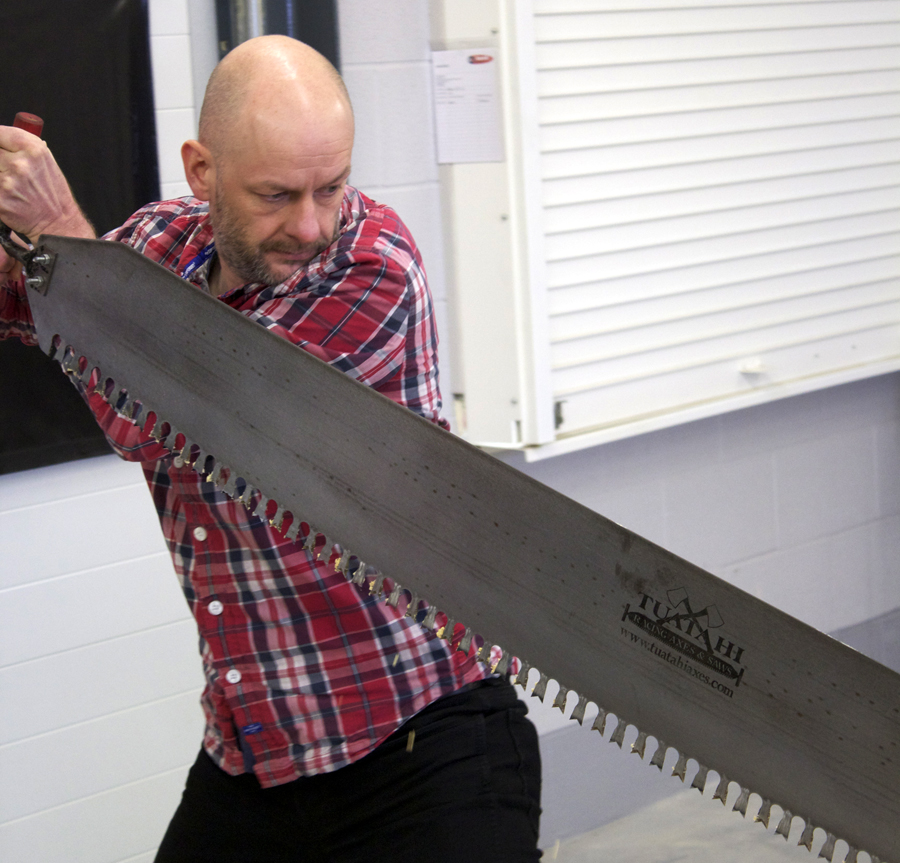 What big teeth you have…

The single buck saw isn’t your average DIY saw. It’s a monster. £1,500 worth of shiny steel, six foot long and lined with deep, deadly teeth, and we were going to use it to cut through an 19 inch thick piece of tree (the pros use even bigger teeth, with the world record standing at an astonishing 9.395 seconds). It quickly became obvious that this event was about technical mastery as much as speed and strength, as Taff talked us through how to grip the saw, position our bodies and slice effectively. Most of this information disappeared from my memory as soon as I clutched the quivering steel, but it must’ve sunk more firmly into Rich’s noggin as he showed remarkable adeptness that had Taff purring “one of the best newcomers I’ve seen.”

As I sweated my way through a stuttering sawing action the bit of advice that did surface was “let the saw do the work. Don’t fight it.” This seemed increasingly impossible: I fought the saw, and the saw won. Never mind my dodgy knees, when the sawn off disc finally landed among the saw dust my arms were so sore I could barely pour myself a much needed glass of water from a jug.

Thankfully, the underhand chop was a far more enjoyable ride. This event involves standing on a log while swinging an axe head between your toes to chop through it. At first this seemed like a crazy event for amateurs, but we we so well drilled by Spike and Rob with a blunter practice axe that by the time we were astride the timber with the sharp beast in our hands we were able to hit the wood without fear of severing limbs (although we wore the lower parts of armoured suits just in case). Our chopping was far from the precision demonstrated by the experts, but on the few occasions we landed the blade in the right spot and at the correct angle, satisfying chunks of wood peeled away from the log.

At the end of our session we cleaned up the wood chop mess ready for Leicester Tigers rugby players to have a go as a fun change from regular training, stocked up on pork pies, and made the long journey home to Somerset. There were a few axe techniques we should be able to transfer to our own wood sheds, but as for the single buck saw – isn’t that why chainsaws were invented?