How to grow mistletoe

If, like me*, you find the annual dismantling of the decorations a joyous occasion and can barely contain your glee at the sight of tinsel–flecked boxes of Christmas junk disappearing back into the attic for another year, just pause a moment before flinging out that wilting bunch of mistletoe. You probably paid a princely sum for that clump of greenery, right? With your cheeks rosy from Christmas cheer, your wallet probably flopped open all too easily and were only too pleased to fling your hard earned dosh in the direction of that gurning mistletoe merchant who saw you coming.

Mistletoe** grows on trees! Yes! Literally! And although it’s naturally spread by the seed-laden dung squitted out from the backsides of our avian chums, it’s possible to impregnate your own tree with very little faff.

Mistletoe is a parasitic plant that grows on Lime trees, Poplar, and has a particular penchant for old apple trees. We’ve ogled many a magnificent bush on apple scrumping missions*** to some of the older Somerset orchards on our books, where mistletoe can be seen dangling amongst the bows like the unkempt barnet of Brian May.

Simply pluck the berries off the foliage of your mistletoe sprig and pummel them into a paste with your fists. Take said paste and smear it over the joints of your chosen tree as if you were basting a particularly knobbly chicken****. Try and smear your seed as high as you can, so your mistletoe commands maximum sunlight when it gets going. Some folks suggest cutting into the bark of the tree to create a flap under which to stuff your berry mush, but my mistletoe managed to germinated just by basting a particularly gnarly armpit of my old apple tree.

But don’t pucker up just yet – mistletoe germination can be rather hit or miss, especially if you are using the underdeveloped berries from a plant that was entwined within a Christmas wreath. It’s still worth a punt though, and be aware that it can take up to five years for those distinctive white berries to develop. The plant pictured below is two years old. If the amount of mistletoe foliage is proportionate to the amount of passion conducted underneath, then we are currently looking at suggestive winks and warm handshakes, rather than lusty clinches. But hey, it’s a start.. 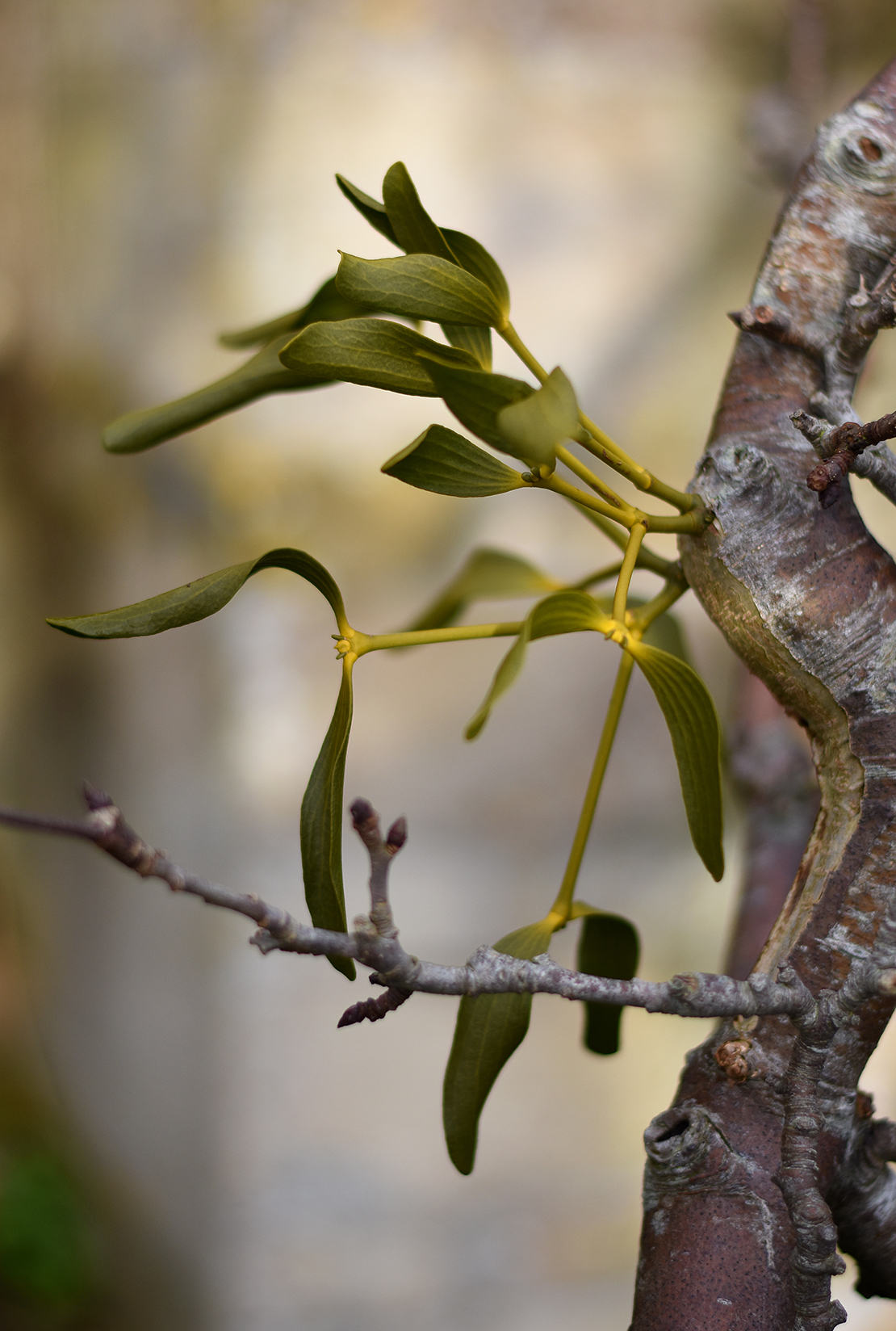 ** Mistletoe fact: Its name comes from the Anglo Saxon words Mistel (dung) and tan (stick). Or Chelsea FC circa: 2007, if your name is Jorge Valdano.

*** And when we say ‘scrumping’ we of course mean permitted visits to orchards to merrily gather apples in wicker baskets. Not stealthy twilight orchard raids involving sacks, balaclavas and the unmistakable screech from the wheels of a speeding Ford Focus.

The post How to grow mistletoe appeared first on Two Thirsty Gardeners.