In a recent press release promoting Fathers Day gift suggestions* we spotted a whisky that has been matured in IPA casks. We’ve had beer that has been aged in whisky barrels but didn’t know it was a thing to do it the other way round. Intrigued, we asked the PR lady for a sample and she duly obliged, sending a small bottle our way in an instant.

The whisky distiller is Glenfiddich, one of the most popular single malt producers on the market, and the batch is part of an experimental series that also includes a whisky aged in a Canadian Ice Wine cask. For the IPA Cask edition, Glendfiddich’s Malt Master, Brian Kinsman, teamed up with Seb Jones of Speyside brewery to make a special IPA that would leave its citrussy hop imprint on the beer barrels that would then be used to finish a new Glenfiddich malt.

Most beers that have been aged in whisky casks have a very obvious change of character, picking up oaky flavours and a hit of whisky. Being aged in this way also changes the characteristics of the beer, regardless of the additional flavours it attracts. But I found it hard to believe that a whisky would pick up much additional flavour from a beer cask, and am not sure I would want much beeriness spoiling a perfectly good whisky. Giving it a sniff there were no obvious hoppy affects at play – just the enticingly fresh aroma of a good whisky.

The taste reveals that this isn’t a new beer and whisky hybrid. It’s not even a whisky flavoured with beer. Instead, it’s an excellent whisky with a flavour that has been subtly influenced by the IPA without the method being obvious through taste alone.

It’s a fresh tasting whisky with a slightly thick, oily texture and some unobtrusive peppery oak to give it some depth of character. And there are definitely some citrussy notes, catching the toffee sweetness before the spices kick in along with some lingering grain flavours.

I thoroughly enjoyed my sample, preferring it neat (it’s 43%) rather than with water or ice, and reckon it would appeal to both the whisky novice and the more committed whisky drinker in search of something different. I’ve got a decent measure left in my bottle which I’m going to save as a chaser the next time I have a couple of IPAs. I think it will work.

Brian and Seb trialled three specially produced IPAs for this experiment: the first using Centennial hops; the second with British Challenger hops; and the third featuring Cluster hops. It was the Challengers that triumphed.

Glenfiddich IPA Cask is available from the Whisky Exchange

*Other Father’s Day gift suggestions we’ve received in press releases include a bag of charcoal, a bottle of Jeyes fluid, and some stuff to clean black spots off patios. This is all true. 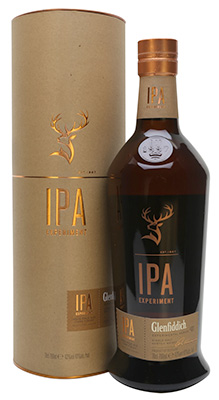